Introduction of MCCB and ACB

The frame breaker is also generally known as an air circuit breaker or universal circuit breaker, mainly used for shut downing the incoming, busbar, and other high-current circuits in the low-voltage distribution system, which consists of contacts, arc extinguishing devices, operating mechanism, and decoupling system, housing, and control unit.

According to the installation method, it can be divided into two types: fixed type and drawer type. The fixed type shell is made of metal, with larger external dimensions and a lower protection level. Drawer type uses an engineering plastic shell, which has a more compact structure, high protection level, easy access.

In the rated current, the air circuit breaker generally reaches from 630A-6300A. They are installed in an insulated metal frame, can be equipped with a variety of accessories, and more convenient to replace contacts and parts, mostly used in the power end of the main switch.

Molded case circuit breaker is also known as a device circuit breaker, mainly used for the in and out of the line, motor protection in the low-voltage distribution system, because of its grounding terminal outside contacts, interrupter, decoupling and operating mechanism are installed in a plastic shell. Auxiliary contacts, Undervoltage trips, and sub-excitation trips are mostly modular, the structure is very compact, so it generally does not consider maintenance, the protection switch that suitable for use as a branch circuit, mostly operated manually, but the large capacity can choose to divide and close electrically. Due to the application of electronic overcurrent detonators,

The difference between air and molded case circuit breakers

The Molded case circuit breaker has a range series of products, which are characterized by compact structure, easy to operate, relatively simple function, generally configured with overcurrent decoupler and instantaneous decoupler, while the frame circuit breakers are functional, especially in recent years, with the application of single-chip computer technology, Frame circuit breaker towards to the high performance, easy maintenance and networking

1.-the appearance and installation size 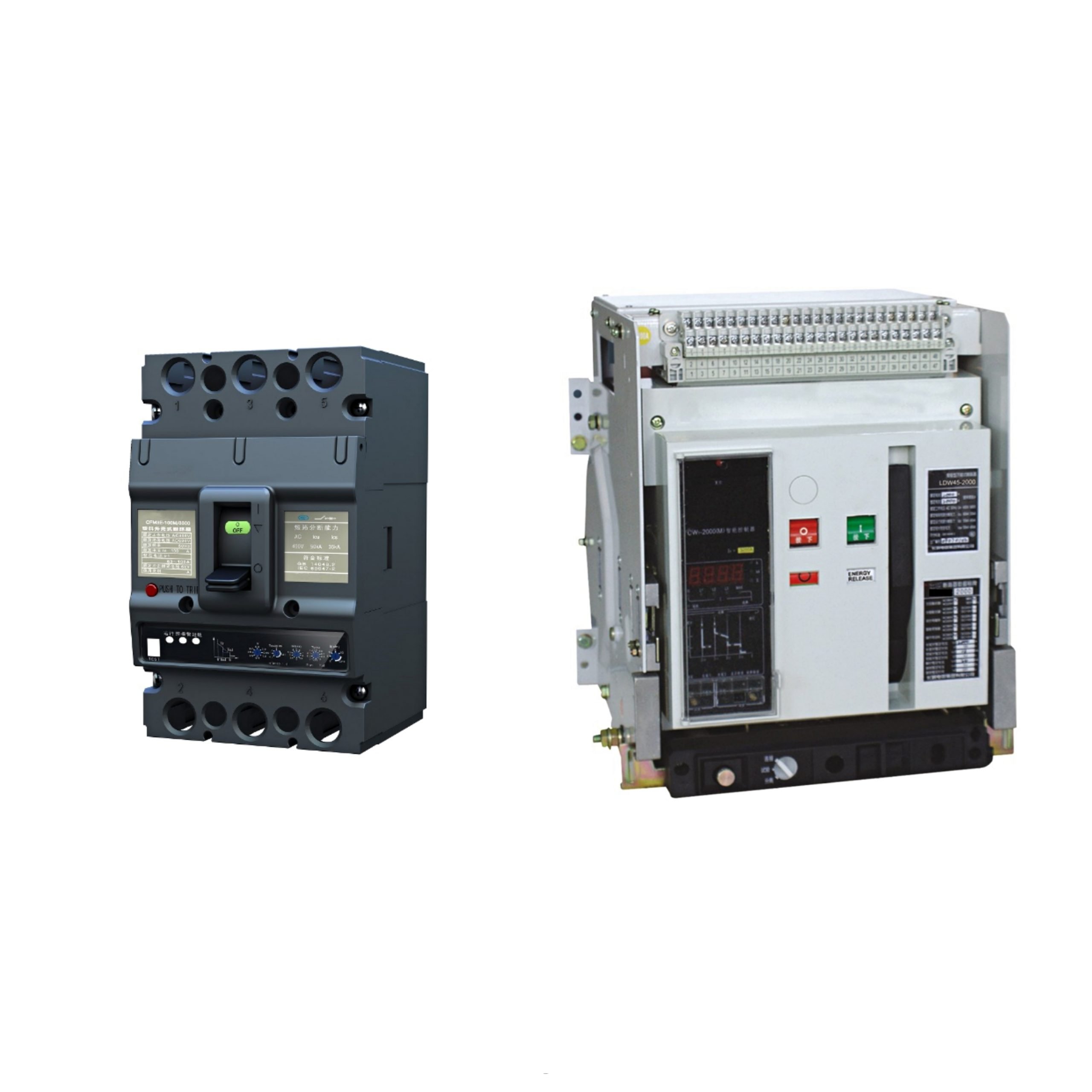 2.- the protection function of the trips

3.-The scope of application

Frame circuit breakers with a rated current from 400A to 6300A，which are mainly used in power distribution networks to distribute electrical energy, protect lines and power supply equipment from overload, under-voltage, short circuit, single-phase grounding, and other fault hazards.

4.- The choice of frame and molded case

Accessories and usage of MCCB and ACB

Currently, on the market, air circuit breakers are mainly divided into DW15, DW16, DW17 (ME), DW45, and other series, the products are composed of the body and accessories. There are no accessories by air  circuit breaker itself, but can effectively divide and close the line, when the overload, short circuit, and other accidents happened in the equipment, it could cut off the line to protect the load automatically;

As a derivative and complementary to the function of the circuit breaker, the accessories have added a richer protection function and control mode, which make more abundant in the application, protection, operation, and installation methods. The accessories have become an important part of the circuit breaker. However, users need to apply the accessories according to the actual control and protection line to avoid unnecessary waste, while the selection needs to be divided into voltage level, AC or DC, the number of pairs of auxiliary contacts, etc.. improper selection of the accessories, can not play a protective role, but also will cause great economic losses.

Contacts mechanically linked to the main circuit-breaking mechanism of the universal circuit breaker and for the indication of the circuit breaker splitting/closing state.

for the voltage source excitation trips

Shunt excitation decoupler is an accessory for remote breaking operation. When the supply voltage between the rated control voltage between 70% and 110%, can break the circuit breaker reliably. Shunt-excited decoupler is a short-time working system, coil energization time can not exceed 1s, otherwise, the coil will be burned.

when the end voltage drops to a certain set value, there will be a delay or no delay to disconnect.

It is mainly used for circuit breaker when a fault occurs to provide signals, which alarm contacts to issue fault indication signals for the following reasons: overload or short-circuit detonation

Which alarm contacts can be connected with indicators, buzzers, alarms, etc. When the alarm signal response should be promptly checked whether the line has a fault.

Applications and problems of ACB and MCCB

Besides, low-voltage circuit breakers are an essential part of the distribution network, but thermal-magnetic circuit breakers mainly rely on thermal double gold and magnetic system, it is increasingly challenging to meet the requirements of reliability, accuracy, and safety of the distribution system, and can not realize the communication network. The intelligent circuit breaker fully applies computer control technology, which not only improves the protection accuracy but also makes the distribution system more reliable, safe, and accurate. At the same time, it can browse and record the grid operating parameters in real-time, providing a detailed database for power load analysis. Therefore, more and more attention is paid to the application of intelligent circuit breakers in the modern power grid. But all choice is according to the real application.

Ask For A Quick Quote

We will contact you within 1 working day, please pay attention to the email with the suffix “@fachine.com”.